In honor of Banned Books Week, I thought I’d tell an insane-o censorship story from my teaching days.

In one of the schools where I taught—this was the year I taught 5th and 6th grade Language Arts—the English department had adopted a brand-new lit program for its 5th-8th graders called Great Books (which is, in short, a series of anthologies containing short stories and book excerpts from prominent and not-so prominent authors from all over the map).  It’s very much like the lit books we were used to using when we were all in school, except the pieces are a little more contemporary than some of those we grew up reading.

(a short story about a dystopian society that keeps all its citizens the same by assigning certain handicaps to combat people’s individual strengths/talents—and *spoiler alert* it ends with the 13-year-old main character getting shot).

I thought it was a little . . . mature for my sixth graders—many of whom (boys *and* girls) still needed me to remind them:

So, we read Vonnegut’s piece and discussed it—and they actually had some very insightful things to say about the themes (the media, individualism, etc.).  It was actually really great. I was mucho impressed by my new school and new students.  Go education! 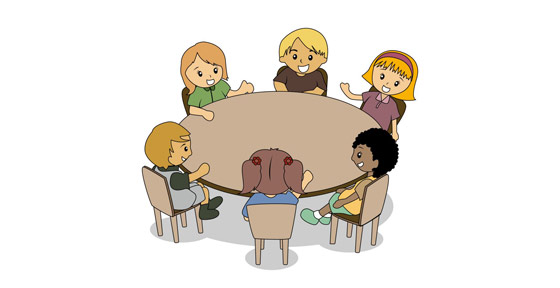 We moved on to the next story.  I don’t remember what it was, but there was swearing in it.  They still handled it OK—I shook my head when they snickered and told them to “grow up,” and they did.  And we had intelligent conversations about that story as well.  Same with the next.  And the next.

Somewhere toward the end of the first quarter, I was called into the principal’s office.  (Insert “ooooooohh” here.)  My principal at the time—a very nice woman and probably my favorite principal I’ve ever worked for—said she’d been getting some complaints from parents about the selections we were reading, and could I go through all the books and blacken out all the inappropriate parts in both the 5th and 6th grade books?

At the time, I had about 60 students.  Out of the four 5th/6th grade teachers, I was *the* Language Arts teacher (when I moved to the upper school the following year, they replaced me with *two* teachers, BTW) and had four preps to everyone else’s two.  Which *also* meant I had two planning periods a week (if I was lucky) when everyone else had at least one a day.

That said, I felt a little taken advantage of that year.  It was my first year in a new school and a new state.  Plus, I was dealing with a program no one else had used before.  Regardless of my stance on the issue, I had plenty on my plate, and now I was asked to do this??

Feeling all the pressure, I realized that, if I didn’t start standing up for myself, I was quite literally going to be taking 60 books home and going through them with a Sharpie.

For example, we had read a fantastic book for summer reading that year—Cynthia Kadohata’s 2005 Newbery Award winner Kira-Kira—and I’d received hate mail from one parent about it before school had even begun (a book that had been chosen before I’d even been hired for the position, by the way) because the one female character *talked about* kissing a boy. It was not actually even *on* the page—it was merely mentioned in conversation, amounted to about one sentence, and had absolutely nothing to do with the book as a whole.

That didn’t seem inappropriate to me at all—I was shocked at the e-mail—so what the heck did I know?

Furthermore, I told my principal that blackening out words and passages is not only impractical and wrong, but that it would serve as a “highlighter.” If my students were reading and then were, all of a sudden, faced with a big black mark, don’t you think they would to try to see what was so “bad” that it needed to be censored?

I told her I would be happy to draft a letter to go out to all parents inviting them to blacken out what they deemed “inappropriate” . . . even if that meant defacing a bunch of brand-new books.  That way, parents would actually have to read the selections themselves and think critically about each.  And perhaps discuss them with their kids.

*Yes, I did actually say these things, and they actually loved me.  They STILL do.

**Note to teachers: Kids like when you’re mean to them.