I’m leaving for the Romance Writers of America national conference (in Orlando!) Wednesday, and I have—oh, I don’t know—a bajillion things to do between now and then.  So I’m not sure I’ll be as available as I’d like in terms of blogging and such, but I do plan to keep you posted throughout the week/weekend on my experiences.

For instance, I hope to regale you with tales of all the awesomesauce things I’m doing and learning—and all the faboo people I’m meeting.

I mean, I’ve already been invited to sing karaoke with my Twitter soulmate (or Twitsom, as we now call each other), Cambria Dillon and some other cool chicas.  So, that should be a decent story, right?

Um—did I mention Twitsom and I haven’t met yet?  But we share a love of all things YA, Sour Patch Watermelons, and triathlon-doing husbands, so I’m not worried.  We are going to rip on Tim Tebow and sing Lady Gaga, and all will be well with the world.

Unless, of course, we discover we are actually the same person . . . which could be the case?  There’s a SFF story just waiting to be written!  But I’ll let you know once I meet her Wednesday. 🙂

HOLY CRAP—MEG CABOT IS GOING TO BE AT RWA!!!!  So, I’m basically dying.  And my flight gets in at almost the *end* of one of her author signings, so I’m dying in a different way over that.  <frownies>  But I’m hoping to stalk catch her another time during the conference. 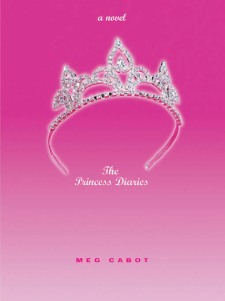 M told me to wear my tiara when I meet Meg Cabot. Should I? SHOULD I?? Yeah, probably not. 🙂

Tonight—Monday, July 26—I’ll be hosting a live chat on Shenandoah Writers Online (from 9-10 P.M. EST.).  The topic is  writers’ conferences.  Bring any and all questions you have about conferences to the chat—and, if you’ve attended any such functions, we’d love to have you share your experiences!

To enter the chat, simply log into Shenandoah Writers Online and click “Group Chat” at the bottom right of the main screen.

You must be a member of Shenandoah Writers Online to participate in the chat, but we’d love to have you join.*

OK, that’s all for now.  Writing this blog post wasn’t even on my list—yeeks!

*Not an SWO member yet?  Click here to get started.

ME: I’m a little behind in typing up this recap.

VOICE IN MY HEAD:  A little?  You’re a month behind! *shakes a fist in Why-I-Oughtta fashion*

ME: *cowers* I know, I know.  But better late than never, right?

At May’s SWO live chat, we discussed story openings.  Here’s a little precursor to our session.

If you missed the chat, or if you were there but it was too buggy to keep up (sorry!), here are the highlights:

At the start of the chat, attendees posted either their own story openings or the openings of their favorite books.  This was not meant to be a critique session (although a little of that went on); rather, we pointed out what the reader learns from each opening and what makes each opening successful or not.

This led to talk about what it means to have a “successful” opening.  It’s subjective, of course; but, for the most part, we agreed that in order to deem a story opening a success, it has to hook the reader in some way—because, while readers might give the author a few chapters before giving up, agents pretty much won’t.  Translation: Your opening needs to do something—and right away.

As we looked at real examples, we noted that the best ones oriented the reader.  As one member put it, an opening has to service your narrative in a clear way.

The best openings were those that:

WAYS TO ORIENT THE READER

The man in black fled across the desert, and the gunslinger followed.

Up-and-coming YA author Jodi Meadows was kind enough to send me her opening to the first book in her New Soul trilogy, Erin Incarnate.  I have posted her thoughts it on Shenandoah Writers Online under the “Files” tab at the top of the main page.  In the file, Jodi shows her original opening and talks about the changes her agent wanted her to implement—and why making those changes made her opening stronger.

We also indicated you can probably play devil’s advocate for each of these suggestions or cite counter examples in published books.  However, it’s important to remember we’re trying to establish some “rules” here—not exceptions.  As well, we’re talking about writers trying to break into the industry given today’s market—not established authors whose books are going to sell a bajillion copies no matter what they write.

Now, it’s your turn.  Anything to add to the conversation?

*Not an SWO member yet?  Click here to get started.