When did you realize you wanted to be a writer?

That’s tough. On some level, I’ve always known — I have “books” I wrote dating back to first and second grade; and, from about grades four through eight, I wrote over 40 adventure stories about this one character.

However, it never really dawned on me in high school and college that I wanted to do this as a career. I was gung ho about theater then, and if you asked me from ages 14-22 what I wanted to do with the rest of my life, I’d have told you I wanted to be on General Hospital —

perhaps with a role opposite Sonny or Nikolas — heh. #GH4eva

I always loved writing, and although I majored in English, it wasn’t because I wanted to be a writer — it was because I was good at writing and getting a degree was going to appease my parents (I’d have something to fall back on — you know, in case I didn’t become a soap star 🙂 ).

It wasn’t until I became an English teacher that I even thought about writing as a career.

Not because I disliked teaching — quite the contrary — but it was more something I thought I’d be good at and something related to my interests of English and drama (both of the kid variety and of the stage variety). 🙂

Writing crossed my mind the year I taught middle school language arts, when my school sent me to a two-day conference on a literature program we’d just adopted. During one of the breaks, the instructor mentioned NaNoWriMo — the marathon of a writing competition that occurs every November (National Novel Writing Month). It sounded wonderful and horrible at the same time, and when I returned home the next day, I signed up . . . and that’s how I started writing my first manuscript.

What do you like to do in your free time? (Do you have free time?) 😉

That’s a tricky one, because now that I’m working full time as a teacher again, plus freelancing, my free time is far less than it used to be. I spend my free time figuring out how to best use my time — how to get to the all-important writing.

But, if I’m not glued to my office chair, I like to watch TV & movies, read (which I still kind of lump under the work category because I can’t shut off that part of my brain when I read), cuddle with my beagle, hang with friends, go out on the town, go to writers’ conferences (I just enjoy them way too much to consider them work!), cook, sing, and travel. Not necessarily in that order. 🙂 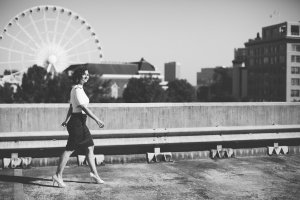 What was the querying process like for you? What did you learn?

It was just how I think it should be. It was like a rite of passage.

While I started out all fresh-faced and giddy when I sent my first few queries — did the request dance whenever I got one, etc. — I also experienced periods of extreme lows.

But I think that’s kind of the rule. Not that it wouldn’t be nice to be the exception, but I feel like I earned my “street cred” by taking that journey. (I’m also pretty sure putting “street cred” in quotes like that disqualifies me from really having it.)

I learned just how much the details matter and I learned what it’s like to grow that “thick skin” everyone is always talking about.

I learned that it’s important to be naïve at first — to get excited — to think, after each request you get, “This could be it!” even if you’re sorely mistaken. Because if you’re not reveling in those little victories and allowing yourself to be excited, you shouldn’t be doing any of this.

I also learned I’m not alone (that’s the nice thing about being the rule and not the exception). I have a tremendous support system in family and writer friends alike.

I ALSO learned I’m extremely lucky to have been fortunate enough to sign with Barbara Poelle of the Irene Goodman Literary Agency. I’m still pinching myself! #dontmakethatdirty